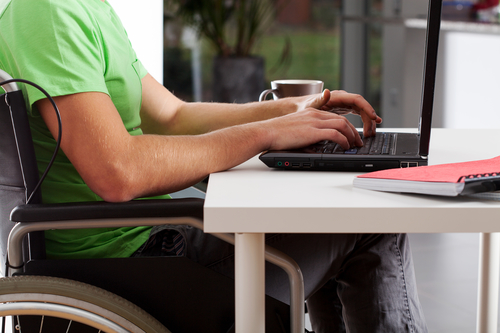 Young man on wheelchair writing on laptop and drinking coffee

SAN ANTONIO – A family from San Antonio is fighting for the rights of their disabled son to social media.
Ryan Dickerson is the 19-year-old disabled student who was a victim of medical malpractice.
Daniel Dickerson, the father of Ryan created a Facebook page called “Ryan’s Avengers.”
Daniel said, “He suffered a traumatic brain injury during the birth process.”
The father of Ryan said that his son lost about 65% of his brain, but one thing he didn’t lose is his will to struggle. “This kid’s resilience is just amazing.”
Ryan attends school at Judson Independent School District’s Veterans Memorial High School four days per week. His family filed a Due Process complaint with the Judson ISD last summer to ensure their son would receive Free and Appropriate Public Education.
After few months the district notified Ryan’s parents that he would no longer be able to use his TAOS, or Therapeutic Ambulatory Orthotic System, which is a helping walking device.
“It appears that the school has engaged in what we can only characterize in a bullying and harassment series of tactics. For them to effectively chain him to this chair for eight hours a day, four days a week is just cruel, said Ryan’s father.
Ryan does not have any back cord injury. Ryan’s father said it is extremely difficult for him to sit in his wheelchair for the whole day since Ryan can feel everything.
A district spokesperson said safety was the reason administrators would not allow Ryan to use the TAOS after signing a document to give JISD permission to speak with News 4 San Antonio “This is essentially a student safety issue,” Steve Linscomb, with JISD, said.
We stopped the use of the TAOS after we informed that Ryan did not meet the weight and height standards for the device, said, the district’s spokesperson.
Ryan’s parents shared a letter with us that the TAOS manufacturer wrote to the school district. It was written in the letter: “The T2 style mobility base Ryan is currently using was designed for larger patients and adults. Based on our review and conversations with the certified TAOS provider prior to ordering, Ryan falls under the maximum height and weight.”
The letter said: “Exceptions to the recommended heights and weights stated are granted on a case by case basis. Again, we reviewed Ryan’s measurements and the evaluation form at the time of the last order. We also had conversations with the TAOS provider and together we concluded an exception to the recommended height and weight recommendations.”
Linscomb said: “There is an unsigned letter and it is not specific to this particular student’s specifications in terms of height. It makes no mention of the height or weight of the student at all.”
Linscomb said that the district is open to having a conversation with Ryan’s family about the issue.
Ryan’s family is asking people to reach out to the school board.

Sign-Ups for Google Fiber Begins in These San Antonio Neighborhoods

Self Driving Cars: Will They Affect Insurance?