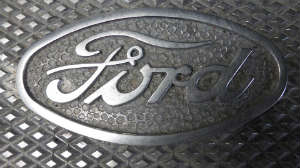 There’s a mystery going on, a real whodunnit… And the amateur detectives are busy examining the evidence, taking stock of the grainy image like it’s a blurry Bigfoot photo. Or the Lochness Monster.

In this case it’s no fabled monster, the photo in question is of a truck. Someone sent in the image of a pickup to Australia’s Wheels magazine, and it looks strikingly like the design of a Ford Ranger.

The car’s front three-quarters as well as a shot of the rear is captured by the photog. He reportedly spotted the truck in an “outer Melbourne suburb.”

Wheels can’t definitively say what model of truck they’re looking at. To them, it looks like a version of the Ranger or at least somebody mimicking the Ford style.

The photo is all kinds of weird so it’s hard to draw conclusions. First, the background’s been darkened, likely meant to deter location identification. Second, there’s a sign image reflected on the hood. Hmm? Third, there’s a wheel dolly stationed under the front right wheel and pallets scattered in the background.

What does it all mean? Well, wait, because there’s more strangeness afoot. The shiny sheen to the photo points to some post-processing. Finally, there’s no outside mirror on the front door but there is a shark fin antenna on the roof.

The thing is Ford Trucks have always used whip antennas so the mystery deepens. But, on the other hand, the 2020 Ford Explorer does adopt the shark fin. You getting all this down??

What’s definitely Ford-like about the mysterious truck is the round chrome piece in the center of the grille bars behind the black square. Plus, the dual crossbars could be a new take on the twin bars on the current F-150 XLT.

There are other clues this is the 2022 Ranger. The C-shaped elements at the front could be home to LED lights, a Ford pickup feature. Ford is also the only one of the Big Three pickup manufacturers to use square fog lights. Plus, the rear bumper and wheels mirror those of today’s Ranger.

Wheels magazine theorizes that because of the blacked-out windows it’s simply a clay model of the coming Ranger on its way to Ford Australia.

The reflections are strange too. The windshield reflects what appears to be an overhead light. On the other hand, the side windows make it seem as if the car is parked outside.

The final oddity is the bodywork behind the rear wheel, not to mention the recessed step in the rear bumper.

THE TRUTH IS OUT THERE

Despite all the conflicting information, we do know something new is on the way. Road and Track revealed the next-gen Ranger is codenamed P703. It will be accompanied by a Ranger Raptor in 2022. In this same year Ford will tie up with Volkswagen on pickups.

Let’s hope by then this ‘great truck mystery’ is solved and doesn’t become the stuff of urban legends.